Up first: 47 Meters Down: Uncaged! 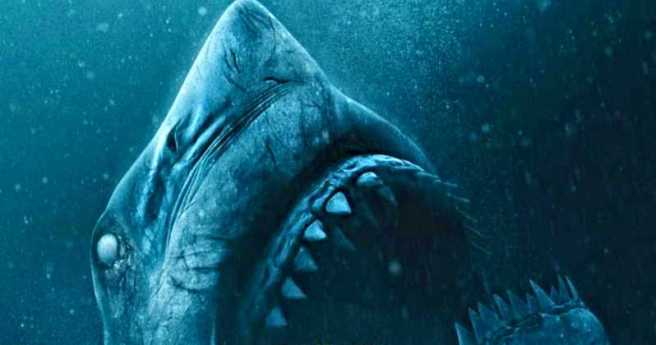 Okay, so the blind thing may not actually be as scary as it looks. But look at the picture! It’s creepy, amirite?? And it can find you even if you’re being really, really quiet. Or…wait, did I get that wrong? I’m not sure. Seriously, I’m still not sure!

Plot rundown: Odd-girl-out Mia (Sophie Nélisse) ditches a boring trip with her step-sister Sasha (Corinne Foxx) to go diving with Sasha’s bitchy friends Nicole (Sistine Rose Stallone – Rocky’s daughter!) and Alexa (Brianne Tju). Where are they diving? At the recently-discovered underwater Mayan temple site Mia’s diver dad is excavating! Turns out, there’s a blind shark cruising around down there, though. I don’t know why this is scary, but it does kind of look like a zombie shark, so maybe that’s it?

What’s to Love about this film: The underwater city! It’s never named or explained, but all we need to know is that the father of the main character, Mia, is not just handling the underwater excavations, he’s also Chris, the DJ from Northern Exposure! Sadly, he pulls a Samuel L. Jackson/Deep Blue Sea about half-way in, womp-wommmmmp!

What’s to Hate about this film: The absolutely bonkers logic of just about everything that happens. First of all, why is Mia considered a loser? Since when are the beautiful blond girls the losers at school? They don’t even try to make her look like the geeky good girl they try to present her as. No glasses, even!

Next: If you were with a bunch of idiot teenaged girls looking for fun, would you really go diving in uncharted waters that are off-limits to the public to admire the beauty of a lost Mayan temple? Wouldn’t you rather go to the beach or on the Popular Kid Boat Trip that they ditch out on?

Third: I think there are some sort of communicators/speakers built into the full face-mask/breathing apparatus they all wear, which explains how they are hearing one another speak. But…when they locate one of Mia’s dad’s team members doing…underwater welding? That’s what it looked like. Anyway, he is fully submerged underwater, yet SOMEWHERE, SOMEHOW he has what can only be a waterproof boombox blaring some horrible ’90s tune THAT THEY CAN ALL HEAR. Yes, it’s muffled as hell. Because they are all UNDERWATER. There is absolutely no reason why anyone would attempt to listen to music underwater in this manner. FAIL.

Fourth, and worst of all: To make yet another shark release Sasha, Mia takes a FLARE GUN from above deck down into the water and shoots it at the shark, hitting it and thus saving Sasha from becoming a Shark Lunch Special. Here’s the problem…that absolutely cannot happen. Because water. There are such things as underwater flares, but she is clearly using a regular ol’ flare gun, which pretty much needs air to work. So again, MONUMENTAL FAIL.

Is it worth a $3 rental? Sure! Best if watched with friends, some booze, and a sense of humor.

Tune in tomorrow for the next movie we watched, Indigenous.