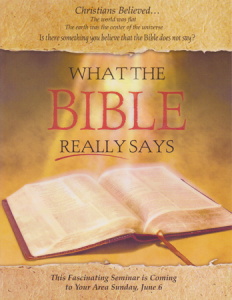 When I opened my mailbox this evening, the word “BIBLE” leaped out at me from a flier shoved in the back of the box. I took it out and at first couldn’t decipher if this was a pro-Christian, anti-Christian, or worse, some white power meeting being slyly advertised.

I scanned all four pages quickly to try and determine what exactly this was, but things just got more confusing when I read this:

“Christians believed…The world was flat. The earth was the center of the univere. Is there something you believe that the Bible does not say?”

Ummm, sure. I believe lots of stuff that’s not in the Bible. Like, that Peanut Butter M&Ms pair well with just about anything and AMC’s The Walking Dead just plain isn’t interesting anymore. So….what point was trying to be made? Is the speaker saying that Christians were wrong about a lot of things? That’s no shocker. Or are they saying the Bible can clarify confusing topics like gravity and the shape of the earth? Well, I wondered, WTF does the Bible really say? Passing time on the elevator, I glanced at the bottom of the first page of the flier, which advertised that “this fascinating seminar” was coming to my area next week.

I don’t know about you, but when I see the words “Christian” and “seminar” in the same flier, I imagine those “parties” that Landmark (not the indie film distributing company — the OTHER Landmark) and Scientologists hold. You know, the kind where they don’t let you pee or eat for more than six hours and separate you from the now-hated friend who dragged you here? The kind where they try and get you to sign over all your worldly possessions and promise you guaranteed fame and success?

This made me wonder if the word “seminar” was supposed to lull my liberal left-coast brain into a false sense of security. “Seminar” means education, right? Secular education. Oh, wait… As I read on, I pick up that yeah, this is pretty Christian stuff, although the words “God” and “Christ” only pop up once in the whole pamphlet. But I am too distracted by the illustration on page 2 to really think about it. 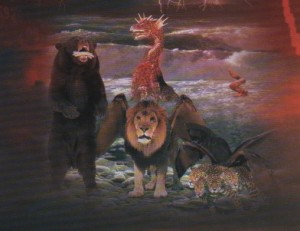 AWWWWWWW YEAAAAAHHHHHH! Sweet! Sign me the hell up! So whatever the Bible really says, it apparently has something to do with sea monsters, bears with either scrolls or bones in their mouths, Aslan from Narnia, and a four-headed leopard. With wings. Maybe this is all in Revelations or something, but I grew up Catholic and I SWEAR I would remember Aslan being in the Bible. I mean, I know C.S. Lewis was Catholic and Aslan was a Christ figure and all, but…I digress.

Let me take a moment here to say: I mean no offense to Christians *in general*. I know many and in a sense, I guess I am one since I try to live by the Golden Rule. I especially don’t mean offense to the ones who live good, simple lives and help their communities in a sincere effort to help and learn. In particular, I am not wishing to offend the Christians who are contentedly NOT mailing fliers to me.

Page 3 socks it to us with the topics or rather, the “answers” that will be presented over a 4-day period (not sure if they let you go home in between seminars, but let’s assume they do): 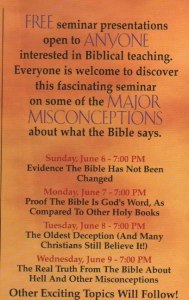 It reads like a Biblical Cosmo cover. I expected to see “7 Ways to Tell if Your Man is on the Prowl” underneath “Evidence The Bible has not been Changed”. What does that even mean, anyway? Changed via bad translation, or conspiracy or aliens or something? Because that would explain a lot. Anyway, presented using words like “Evidence” and “Proof”, the implication is: And we’re totally not evangelical Christians. Srsly. Because would Evangelists have topics using these words? These must be scientific people if they are offering proof that the Bible is God’s word. **Disclaimer: “as Compared to Other Holy Books” may refer to that tattered copy of The Thorn Birds that’s still on your parents’ bookshelf** 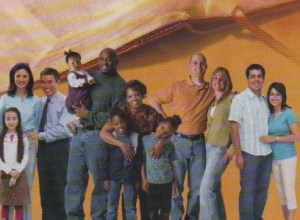 At last, we come to the back cover, which recaps that this seminar is indeed a deal at Absolutely Free. But once again, I am distracted by the picture in the lower left-hand corner – yup, this is the sampling of whom this congregation welcomes: the ethnically diverse, heterosexual family (although the white folks have no kids – does this mean something??). Oh well, best not to over-analyze. But then, what would I do on a Thursday night?

But who is the Speaker at this seminar? It’s this guy: 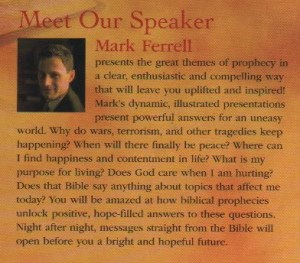 It took some time on Google, but I found out he either is or was a pastor at the Seventh Day Adventist Church in San Francisco. It was kind of a let-down to realize that there was no big secret agenda going on – just a bunch of churchgoers. I did get a little excited (“Wow! I’m breaking a big story!) when I stumbled across a guy on Google with the same name (different spelling) who is a screaming revisionist and racist. You know, the kind of people who refer to Jewish people as “Zionists” and who are convinced that the Holocaust didn’t exist? Yeah, those guys. But as I said — different guy.

As I wrap this up, I’m feeling a little bad because technically, I live essentially a “Christian” life, albeit in the non-Jesus worshiping, pro-choice, pro-gay marriage, Wiccan/pretty much agnostic sense. So who am I to make fun of Christians just for trying to win over a few new members to their SDA team?

I think it’s really more the brochure that I find offensive. It reminds me of political propaganda, no matter how pure and equality-loving the message is. Having an open meeting at your church? Then just say so. Don’t call it a seminar and use phrases that you hope will appeal to a non-believer in some ploy to trick them into showing up. Just invite us. Sure, it’ll be pretty quiet, but at least it’s an honest quiet. 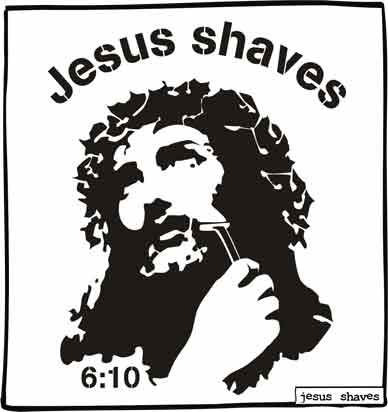